The following story about a presidential program to demolish whole neighborhoods of inner city fabric in the United States and turn them back into wilderness has been making the rounds around news blogs.

Having outlined his strategy to Barack Obama during the election campaign, Mr Kildee has now been approached by the US government and a group of charities who want him to apply what he has learnt to the rest of the country.

Mr Kildee said he will concentrate on 50 cities, identified in a recent study by the Brookings Institution, an influential Washington think-tank, as potentially needing to shrink substantially to cope with their declining fortunes.

Most are former industrial cities in the “rust belt” of America’s Mid-West and North East. They include Detroit, Philadelphia, Pittsburgh, Baltimore and Memphis.

In Detroit, shattered by the woes of the US car industry, there are already plans to split it into a collection of small urban centres separated from each other by countryside.

“The real question is not whether these cities shrink – we’re all shrinking – but whether we let it happen in a destructive or sustainable way,” said Mr Kildee. “Decline is a fact of life in Flint. Resisting it is like resisting gravity.”

This is the type of neighborhood that the government wants to disurbanize. It is located in central Detroit. 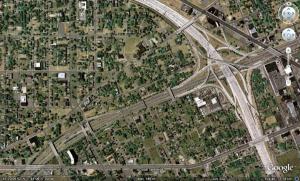 To someone trapped in the mindset of development and control that we have practiced in the 20th century, a place like this is a nightmare. It is not possible to consolidate properties in order to bring in a large developer and a large bank that will finance “re-development” of the place. Worse yet, properties have been abandoned randomly, turning what were neat row houses with identical lots into a pockmarked landscape of randomly-sized public land chaos. Better to demolish everything and start over.

There is another mindset through which to interpret such a neighborhood, that of complexity. If we embrace complexity, then the randomly sized pockets of open land are an exceptional opportunity to renew the city of Detroit. They form a fractal solution set to new construction that many different people can participate in and contribute to. It can accomodate small, medium-size and eventually large-size businesses in close proximity with diverse housing and convenient transportation structures.

But why has this not worked for Detroit? Because its process of growth has not been focused on fractal scales but only on big projects and big businesses. Now that the big businesses are dying the city is threatened with disappearing and has to beg even bigger governments to prevent their death. That cannot go on forever. Death is a normal, natural process, and big businesses disappearing should never be a threat to a large city. The economic fabric of a city must always be renewed by new businesses. It is this renewal that creates a sustainable business ecology. At some point Detroit stopped the process of new business creation, and from then on its decline was assured.

Instead of demolishing its remaining neighborhoods and surrendering to the decline and death that will surely follow in its reduced form, Detroit should instead adopt the process of a special economic zone in those neighborhoods it wants to return to “nature”. Tolerate people build as they wish and let a slum happen, and from the slum will emerge the businesses that will renew Detroit’s economy. It can’t be worse than the bulldozer.