In previous posts I argued that the only way a modern housing subdivision was possible was by the creation of a permanent, extreme housing crisis by the authorities attempting to control development. Now this housing crisis is catching up with American cities and a phenomenon that was until then limited to dysfunctional third world countries, squatter camps, is popping up all over the country.

From the well-kept interior of the Caros’ place, one can hardly see the jagged rows of tents and shanties on the vacant land around them. About 200 people have built informal habitats along the railroad tracks, primarily poor whites and migrant workers from Mexico.

There are many names for this fledgling city, where Old Glory flies from improvised flagpoles and trash heaps rise and fall with the wavering population. To some it’s Little Tijuana, but most people call it Taco Flat.

Just to the south, under a freeway overpass, there’s another camp of roughly equal size called New Jack City where most of the residents are black. Even more dwellings are scattered throughout the neighborhood nearby, appended to the walls of industrial buildings and rising up the flanks of freeway spurs.

Fresno, which the Brookings Institution ranked in 2005 as the American city with the greatest concentration of poverty, is far from the only place where people are resorting to life in makeshift abodes. Similar encampments are proliferating throughout the West, everywhere from the industrial hub of Ontario, Calif., to the struggling casino district of Reno, Nev., and the upscale suburbs of Washington state.

In any other country, these threadbare villages would be called slums, but in the U.S., the preferred term is tent city, a label that implies that they are just a temporary phenomenon. Many journalists, eager to prove that the country is entering the next Great Depression, blame the emergence of these shantytowns on the economic downturn, calling them products of foreclosures and layoffs.

While there’s some truth to this notion, the fact is that these roving, ramshackle neighborhoods were part of the American cityscape long before the stock market nosedived, and they are unlikely to disappear when prosperity returns. The recent decades of real estate speculation and tough-love social policies have cut thousands of people out of the mainstream markets for work and housing, and the existing network of homeless shelters is overburdened and outdated.

People such as the Caros are part of a vanguard that has been in crisis for years, building squatter settlements as a do-or-die alternative to the places that rejected them. This parallel nation, with a population now numbering in the thousands in Fresno alone, was born during the boom times, and it is bound to flourish as the economy falters.

“The chickens are coming home to roost,” said Larry Haynes, the executive director of Mercy House, a homeless outreach organization based in Southern California. “What this speaks of is an absolute crisis of affordability and accessibility.”

In Fresno and other struggling cities, which perpetually strive to boost tax revenues with development, tent cities are often seen as symbols of criminality and dereliction, glaring setbacks to neighborhood revitalization efforts. That perception is common wherever informal urbanism exists, said Mehrotra, and it often leaves squatter camps on the brink of ruin.

“You are always on the edge of demolition,” Mehrotra said. “There’s a kind of insecurity in the lack of tenure on the land.”

This hit home in Fresno a few years ago, when workers began raiding encampments throughout the city, tearing down makeshift homes and destroying personal property in the process. The city of Fresno and the California Department of Transportation conducted these sweeps in the name of public health, citing citizen complaints about open-air defecation.

Yet the raids did nothing to stop tent cities from forming, and they ultimately led to lawsuits. In October 2006, residents who lost their homes in the raids filed a class-action suit against the city of Fresno and the state of California. A U.S. district judge ordered the defendants to pay $2.3 million in damages.

The same features that define the process of every squatter town are present. There is the random occupation of land, the lack of any amenities, and of course the police repression that makes it impossible to create a viable economy. As the public authorities run out of money they will have to lighten the repression and the squatter towns will move into the second class, one with fixed buildings and small outlaw businesses that will attract even more of the poor looking for subsistence. They will become America’s Dharavis.

Instead of using repression to enforce a planning system that drives people into destitution, the authorities should instead act pre-emptively by extending the towns’ infrastructure ahead of urbanization, not in collusion with home builders, and tolerating that the settlers build themselves out of poverty, something that they know quite well how to do. Over time these neigborhoods would go through an unslumming process, and their social and economic liveliness would make them even more attractive than subdivisions, at which point they may become historic cities the likes of which people always built before the modern planning process. The people who were once destitute would be small-time property developers and landlords, and for those who still had nothing the process could be repeated in a new neighborhood.

Update: Here are some pictures of the “Hoovervilles” that sprung up in America during the 1930’s. 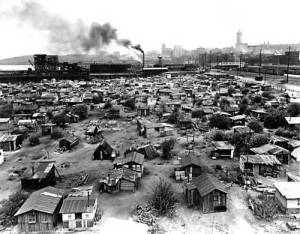 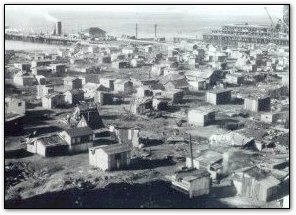 The beginning of a real place.

Fitness is about symmetry

On City Comforts they make the case that Daniel Libeskind’s abominable extension to the Victoria and Albert museum could be made to fit with the museum and South Kensington in general. To support this they link to this Good City post on traditional neighborhoods and modern architecture, which argues that the only thing necessary for a modern building to fit in a traditional neighborhood is that the site plan be well integrated into the public space. As evidence for this they show a picture of a modern house in Lincoln Park, Illinois. The house in that picture actually has qualities that the Libeskind addition doesn’t have, mainly that it has several scales of geometry symmetrical with its context. The walls of the modern building are symmetrical with the walls of the historic buildings, and all buildings are thus linked together into one fabric. The windows are different, but that is the outcome of adaptation to changing needs, which requires new scales of geometry.

Integrated site plans are a necessary but insufficient condition of good urbanism. The idea that you can make a whole out of an anything goes architectural approach was rejected even by nihilist-leaning Rem Koolhaas. In complex systems symmetry is found because it is the most physically efficient process. Remembering that the definition of symmetry is a preserved structure after undergoing a transformation, we can more clearly define what kind of modern architecture is good for a historic neighborhood. A new building fits into a historic neighborhood if its geometry can be derived from an old building with the fewest possible transformations. That is to say, all reusable scales are reused, and the modern building has all the useful new geometry that we require in our time. What makes a neighborhood historic are those reusable scales and not the age of the buildings. The building in Lincoln Park reuses the wall scales of its neighborhood. Now try picturing it with bright rainbow walls and neon. Does it fit anymore? No more than does the Libeskind extension.

Here is a similar building in Paris’ 19th borough. Its site plan is as urban as could be made, but it is definitely not Parisian. It has no scales in common with its neighborhood. This happened despite the fact that the majority of real estate in Paris is modern. Modern Paris goes unnoticed because it is symmetric enough with its neighborhood that it contributes, or at least doesn’t take away from, the city as a whole.